Germany‘s SPD, the “people’s party without people”, is in crisis. The party is bitterly divided and is losing members. It lacks a clear identity or any clear direction and now it lacks a leader.

Andrea Nahles resigned in the wake of disastrous European election results in which the party came third with 15.8% of the vote, trailing behind the CDU who took 22.6% and the Greens who took 20.5%.  On the same day, a state election in the former SPD stronghold of Bremen saw the party lose control of the city for the first time in 70 years.

These results should not come as any surprise. The party has been languishing in the polls since the 2017 election when it took just below 26% of the vote. It now typically registers between 12-18% in opinion polls, but has dipped as low as 11%. The rise of the Greens and the drop in support for Chancellor Angela Merkel’s Conservative CDU party means that German media are now speculating seriously about the possibility of the first Green Chancellor in 2021.

A joint letter from nine former SPD leaders, including Gerhard Schröder, Sigmar Gabriel and Martin Schulz, calling for party members to hold together during this “serious crisis” which has “existential consequences” not just for the party but for the country, highlights some of the problems the party faces.

Immediately following the recent disappointing European election results, Nahles’ opponents in the party swung into action.  Politicians from the SPD’s largest regional party in North-Rhine Westphalia demanded a vote on her leadership; and left wingers Kevin Kühnert (leader of Jusos, the party’s youth wing), Ralf Stegner (the party’s deputy leader) and Matthias Miersch (leader of a left-wing grouping within the party) released  a position paper demanding clarity, and calling for a complete renewal of the party and a new approach to the governing coalition.

Nahles called for a vote about whether she should continue  as leader, but it became clear that she did not have the backing of the party and she resigned of her own accord, both as party Chair and as leader of the parliamentary group.

One casualty of the leadership crisis could be the governing coalition itself. The CDU/SPD coalition has had a very difficult year, with rows about pensions reforms, the sacking of the head of domestic intelligence and refugee policy.

The SPD was due to review the future of the coalition at the end of 2019, and the SPD‘s leadership crisis could be the beginning of the end of the current government.

Entering a new coalition with Merkel’s Conservatives after the 2017 federal election was always controversial, and was vehemently opposed by over a third of SPD party members. Nahles, the first ever female SPD leader, was elected in April 2018 after a protracted debate in the party about joining the coalition.  Nahles was one of the strongest voices in favour of the coalition, and her passionate promise to make a difference to people’s lives while in government was one of the factors in swinging the vote in favour of governing with the CDU.  Nahles initiated a renewal process in the party, which is due to be completed by the end of this year, and promised sceptical members that it would be possible for the party to undergo a process of renewal whilst in government, when many party members believed that the party should be in opposition in order to do so.

Discontent about being in the coalition has grown since then.  The party’s continuing decline does not seem to bear out Nahles’ argument that the party can grow while in government.

The party executive will decide in June when the new leader will be elected: but this almost certainly won’t happen before October, and possibly later, after the party has fought crucial elections in three east German states, namely: Brandenburg, Saxony and Thuringia.  The party’s position in east Germany is catastrophic: a poll in December even put it in fifth place.

The choice of long-term successors seems fairly limited at present.  Finance Minister Olaf Scholz has already made clear his ambition to be the SPD’s Chancellor candidate in 2021. While Scholz’s polling figures so far have been stronger than those of Nahles, they are not convincing. He is not a popular figure on the left of the party either, partly because of his adherence to his conservative predecessor’s commitment to a balanced budget. However, Scholz has introduced some significant vote-winning proposals including pension reforms and an increase in the minimum wage.

Manuela Schwesig, one of the three intern leaders, is also seen as a possible future leader.   Schwesig has been spearheading the party’s attempt to regenerate in eastern Germany, and in January launched ‘Operation East’, which aims to fight the rise of the far-right populists in the Alternative for Germany, and to assert the interests of east Germans nationally.

Another possible front runner is Stephan Weil, Minister President of Lower Saxony.  A recent Die Welt article argued that the most likely leadership solution will be a joint leadership with Rolf Mütenich from North Rhine Westphalia as leader in Parliament, (Mütenich is currently acting as temporary leader in parliament) with Weil as national party leader. This article argues that this solution would not only satisfy the two groups that contributed significantly to Nahles’s downfall, but also it would keep Jusos head Kevin Kühnert out of any positions of power.  29 year old Kühnert, who headed the ‘No GroKo’ (‘No Grand Coalition‘) movement last year, has been named by Time magazine as one of the ten‘‘Next Generation Leaders’, and has even been suggested as a possible leader by Nahles’s 2018 leadership rival, Simone Lange.

Authors
Penny Bochum
Author
Penny Bochum is a researcher working in Berlin and London. She has worked for Labour MPs and the SPD Bundestagsfraktion. She contributed to the Policy Network's Can Labour Win? with Patrick Diamond and Giles Radice.
More from Policy Network 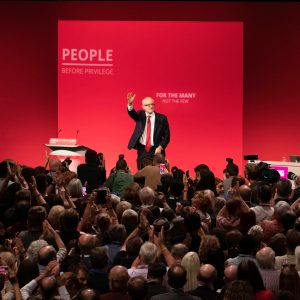