What now for France’s Socialist party

Socialist candidate Benoît Hamon looks set finish fifth in this weekend’s presidential elections in France. The unpredictability of the campaign has been fascinating to watch. Yet, as France moves towards its legislative elections in June, the political landscape remains extremely uncertain, with the Socialist party in disarray

This French presidential election campaign has been dominated not by one ‘story’ but several; not only do we have the unnerving popularity of Marine Le Pen, who looks set to make it into the second round run-off, we’ve witnessed François Fillon’s polling collapse amidst accusations of fraud, the incredible rise of Emmanuel Macron, and more recently, the surge in popularity for Jean-Luc Mélenchon. Amidst all of this, Socialist party (PS) candidate Benoît Hamon, who is currently polling in fifth place with around 8% of the vote, has been the undoubted loser of the election campaign.

The race to the second round is extremely unpredictable, and that is what has made this election so fascinating. Yet, if we look beyond the dynamics of this horse race, what is happening reflects deeper changes in the French party political system which will only become increasingly apparent after this weekend’s vote. Back in late January, before the PS had even selected its candidate, it was already clear that the party was in trouble, and may well even struggle to hold itself together after the election period. Despite the ups and downs of a truly unpredictable campaign, the miserable situation the PS finds itself in has barely altered since then.

At the start of the year, Mélenchon, a former Socialist party senator who quit the party in 2008 to form the Left party (PG), a radical leftwing populist alternative, spoke of the ‘nut-cracker’ effect on the PS. With his advance on the left, and with Emmanuel Macron’s popularity in the centre ground, he hoped to squeeze his former party into irrelevance. Macron, a former advisor and economy minister under President Hollande, who is now running on an independent centrist ticket, was the architect of controversial liberalising reforms of France’s economy over the past few years. Seemingly Mélenchon’s plan is working. If the polling is accurate, Hamon looks set to finish not only well behind front-runner Macron, but it is possible he could receive less than half of Mélenchon’s vote.

The situation in the PS speaks to a wider crisis within the traditional major social democratic parties in Europe. As an organisation, the PS has been always defined by its competing ideological factions, held together by the party which could act as the left’s most effective electoral vehicle in a presidential system. The party is now, however, breaking in two, divided between its traditional left wing and its more social democratic and social liberal elements. The Hollande presidency has been the catalyst for this.

In reaction to the failings of the Hollande administration, Socialist party sympathisers selected Hamon to be the party’s presidential candidate, spurred by his more radical offer which includes a form of the universal basic income. A leading figure in the rebellious leftwing frondeur (slinger) movement of Socialist parliamentarians, Hamon was sacked from government in 2014 for publicly criticising what he saw as the Socialist administration’s turn to austerity and the liberalisation of the French economy. At the same time, members of the party’s right wing, including former prime minister Manuel Valls, have spurned Hamon and called on voters to back Macron instead.

Given the uncertainty of the imminent presidential elections, the legislative elections which will follow in June have been largely missing from the discussion in the UK. Nevertheless, they throw up a set of issues which could be critical to shaping France’s political settlement for the next five years. The two presidential candidates from France’s traditional major parties, the PS and the Republicans, could finish in fifth and fourth place respectively, according to a number of recent polls. There is a chance that neither candidate in the presidential election second round will have the direct backing of a major party with a history of achieving parliamentary majorities.

Unless Fillon wins the presidency, in which case it is foreseeable that the Republicans will obtain a majority in the National Assembly, there is a good chance that some kind of constitutional grid-lock will emerge after the legislative elections in June. Whilst Macron could ride the wave of his victory through until June, his En Marche! movement remains ‘the unknown’, and thus it is difficult to know how it will fare in the legislatives. Le Pen’s Front National stands little chance of obtaining a majority, whilst in the unlikely event of a Mélenchon victory, he would need to rely upon a rapid and radical rallying of the French left to secure support for his presidency. There may be a return to ‘cohabitation’ in France, wherein the president and the prime minister hail from different parties. This, it is worth noting, is not supposed to happen under France’s reformed electoral cycle, wherein the legislatives almost immediately follow the presidential elections.

The next two months look set to be particularly messy ones for French politics. Yet, for the Socialist party, it is clear that this disarray will not stop there. Socialist officials openly supporting Macron will be expelled from the party, according to Jean-Christophe Cambadélis, the party’s first secretary. Depending on Macron’s performance, it is possible many of them will have already jumped ship. As for the rest of the party, the PS will face perhaps the biggest challenge in its admittedly short history. With its national party congress needing to be held within six months of the elections, the PS will be forced to redefine itself in opposition. It will, however, find itself with little room to do so. Reacting to the centre-ground revolution under Macron, the traditional socialist core of the party will no doubt look to move the party leftwards in opposition once again. Yet, with the seeming rise of Mélenchon’s La France Insoumise (Unbowed France) movement, it will be increasingly difficult to stake out this territory.

Whilst much of the Socialist party establishment will no doubt fight to keep the party alive, if the PS loses its title as a true alternative party, there could well be a significant shake-up of the French left. Figures such as Hamon and Arnaud Montebourg could more easily be reconciled with Mélenchon, and a reformulation of France’s leftwing parties and movements under a new umbrella electoral grouping is not unforeseeable. In such circumstances, the PS may survive in some form, but the party of François Mitterrand would already, clearly, be history. 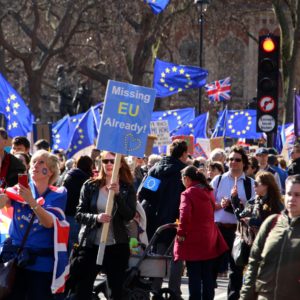