Brexit is proving an existential threat to the British Conservative party. ‘Brexit means Brexit’ has proved to be one of the most meaningless aphorisms invented by politicians to cover up their own lack of a coherent strategy for the UK’s future. The June 2016 referendum offered the electorate a simple binary choice: Remain or Leave. But the reality is that leaving offers a range of multiple choice options, each of which has limited attractions and when specified, might not command majority support as against the status quo.

Until recently Brexit supporters pointed to the ‘clarity’ provided by Theresa May’s Lancaster House speech in January. Though couched in the reassuring rhetoric of Britain seeking a “deep and special partnership with the EU”, the whole approach of the Lancaster House speech was based on a fundamental contradiction: that Britain can leave the EU in order to “take back control” of its “borders, laws and money” and at the same continue to enjoy, as David Davis put it to the House of Commons in December 2016, “exactly the same benefits” as Britain does now as full members. There was precious little willingness to explain to the British public the trade-offs that are inevitably involved in the UK’s EU departure. As a result the Brexit negotiations made little progress, while the ‘national strategy’ for Britain’s future remained lost in Channel fog.

Mrs May’s Florence speech on 22 September was billed as an appeal to our European partners to generate momentum in the Brexit negotiations. In reality it proved a failed exercise in papering over the European divisions in her Conservative party, which were on full display in the 4000 word essay that Boris Johnson published six days earlier, setting out his ‘vision’ of Brexit.

The Conservative party has historically been the most successful vote-winning machine in British political history. In office for two thirds of the twentieth century, and having emerged as the major governing party in the three general elections held since the 2008 financial crisis, Brexit now poses an existential threat to Conservative unity.

For Conservative political strategists there is only one sensible route forward. First, party unity can only be maintained by delivering Brexit, or as Boris Johnson describes it ‘Independence Day’, on 31 March 2019. Only one Conservative MP, Kenneth Clarke, voted against the invocation of Article 50. While there are more committed pro-Europeans in the Conservative parliamentary party than the government’s overall majority of 13, this is only likely to increase pressure internally for a ‘soft Brexit’, not stop Brexit altogether.

Second, if the party is to have a chance of defeating Labour in a general election at any stage between Independence Day and the end of the current five year parliament in June 2022, it must at all costs avoid a ‘hard Brexit’ that leads to a sudden economic shock. Economic growth in the UK is already slowing. Firms are delaying investment decisions and in the case of the City, setting up new offices on the Continent.

Hence the central proposal of Theresa May’s Florence speech for a transition period that maintains as much of the economic status quo as possible for a limited period, which the Prime Minister declared in her speech should “as of now” be two years. If I was a Brexiteer I would be alarmed by this loose formulation. It would be toxic in the Conservative party to suggest that any transition might stretch beyond the date of the next general election and give Labour an opportunity to campaign for a different approach to Brexit.

The Brexiteers appear to have gone along with this new policy. However some cling on to the illusion that a bespoke transition deal can be negotiated for the UK in which Britain would cease to be a member of the single market and customs union but retain most of the benefits. Yet the only transition deal available from the EU 27 will be one that maintains the obligations as well as benefits of continued membership of the single market and customs union for the length of the transition. For sovereigntists who are obsessed with ending the jurisdiction of the European court of justice in the UK, this will be a difficult pill to swallow. They will also have to explain to Leave voters that contrary to the claims they made in the June 2016 referendum campaign, freedom of movement will not end until, at the earliest, the final date of the transition period and that, contrary to the (false) promise that Leave would result in £350m extra a week for the NHS, continuing contributions will have to made to the EU budget.

Britain’s EU budgetary contributions have always aroused controversy, way in excess of their economic significance. In theory a transition eases the political problem of Britain’s so-called ‘divorce bill’ and avoids a gap in the EU budget before the end of the EU’s present six year budgetary settlement. But acceptance of large payments during the transition will be very difficult for the Brexiteers. While the Florence speech has been interpreted rightly in Brussels as a softening of the government’s position on the divorce bill, the Conservatives have as yet made no attempt to explain to the public the rationale of why Britain needs to pay a fee to leave. The Prime Minister is politically weak and the continuation of her premiership appears dependent on the support of the most committed anti-Europeans in the Conservative parliamentary party, such as Iain Duncan Smith.

Third a transition deal does not answer the question of a transition to what? Politically a transition gets the government past Independence Day in March 2019. But for a business leader looking into the longer term it postpones but does not reduce uncertainty. So although a transition will avoid the sudden economic shock of a hard Brexit in 2019, it will do little to reduce the slower burning impact of declining business investment in the UK.  This is inevitable given that the government is united (including the chancellor, Philip Hammond) in insisting that its end point will be a Britain outside the single market and customs union. In her Florence speech Theresa May made a welcome proposal for a new comprehensive security treaty between Britain and the EU, but details on the future economic relationship was extremely sketchy. She dismissed both the ‘Norway option’ of EEA membership and the ‘Canada model’ of a free trade agreement, but was obscure as to what something in-between might look like and that is assuming the EU27 is ready to contemplate a bespoke model for Britain.

For the Brexiteers the length of the transition and its uncertain endpoint is extremely frustrating. They believe, as matter of fundamental ideological principle, that any loss of trade to the Continent can be more than made up by the economic opportunities of the trade deals that ‘Global Britain’ will be liberated to negotiate with the rest of the world. The evidence to support this belief is scant. Potential trading partners have so far been circumspect: the best Mrs May could recently agree with the Japanese government is that the prospective EU-Japan deal would be replicated in an EU-UK deal, which raises the question of the potential trade gain from Brexit. The eruption of the Bombardier-Boeing trade dispute, with the United States threatening the imposition of 220% duties on planes made in Northern Ireland, exposes both the hollowness of the prospect of a mutually beneficial trade deal being negotiated with an ‘America First’ Donald Trump, and the UK’s acute economic vulnerability without the power of the EU trade bloc behind it. Yet that does not make the ‘Global Britain’ believers any the less fervent. For them, transition postpones the possibility of realising these great ‘opportunities’.

On the face of it, the Conservative government has no realistic political alternative to reaching some kind of deal with the EU. That is why its negotiating position is so weak. The political and economic shock of walking away from the Brussels negotiating table would be extraordinarily high risk. There is no majority in the House of Commons for a hard Brexit. This makes the best forecast that a transition that maintains the status quo in all but name will be messily agreed.

Political behaviour is of course not always rational. There is a real possibility of an implosion in the British cabinet in the first half of 2018 if a consensus cannot be reached on the necessary compromises. Like appeasement in the 1930s the Conservatives are stuck with Brexit as their” policy. They engineered the referendum. They made the commitment to implement the outcome. The Brexiteers told the public in the referendum that there was little risk of any downside in voting to leave. The Brexit negotiations are being conducted in the same spirit of wishful thinking. If the talks break down or the inevitable ‘bad deal’ emerges, the Conservatives will seek to shift the blame to Brussels intransigence. Whether or not that tactic succeeds depends on the Labour party, but that is another story in Britain’s never-ending European drama. 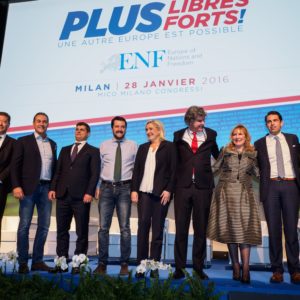 Essays
Aftershock
The promise of the Biden plan
Alexander Perry