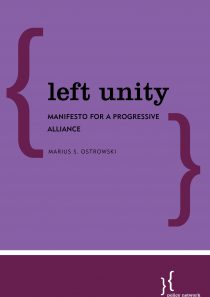 Manifesto for a progressive alliance

Progressive politics is in crisis. Tainted by its accommodation to the neoliberal revolution, the progressive left is struggling to respond as the temporary consensus around liberal democracy and free-market capitalism starts to fray. As the right turns increasingly towards national-populism, bigotry, and authoritarianism, the left is cripplingly fragmented between the green and liberal centre, and socialist and post-communist extremes. The lessons of history teach us the sheer costs of left disunity in the face of a rising far right. But they also offer clues for how to overcome left divisions and build a united, popular progressive alliance to resist it.

In a new book from Policy Network, Marius Ostrowski leverages the spirit that motivated the unifiers of the past, and articulates ten ways in which the left can confront its current divisions. It begins by carefully breaking down what ‘the left’ means in our modern societies: who it includes, what they believe, and what its ultimate aims are. It outlines in detail how and why the left can—in fact, must—embrace cooperation both within and beyond its borders. The book then turns to discuss four major concerns of left strategy, grouped into pairs of contrasting themes or focuses between which the left has to navigate. Finally, it draws together all of these elements into a discussion of the forms that left unity can take, and a set of ten proposals to help realise a progressive alliance.

At heart, the left brings together people and groups who fight for the disadvantaged, the underprivileged, ‘those without’ in society, and fight against ‘those with’ who harm ‘those without’. It is concerned with increasing the power of ‘those without’, raising their position within social structures, and improving others’ attitudes and behaviour towards them. Orienting the left’s concerns are a consistent set of values: equality, justice, solidarity, freedom, pluralism, and progress. The left’s fights cover a number of intersecting dimensions of personal identity whose social salience is more-or-less historically established: class, nationality, sex and gender, sexual orientation, race and ethnicity, religion, education, age, health, and disability. At the same time, they take place in several parallel domains of activity: the economy, politics and the law, culture, education, and caregiving. All in all, this gives the left as an ideological movement a highly complex form, and its first task is to establish a broad equivalence between all of its different fights taking place in different contexts.

In modern, ever more complex society, there are a growing number of organisations that bring together dedicated agents who lead and coordinate left activism on behalf of ‘those without’. These include political parties, trade unions, thinktanks, charities, pressure groups, and non-governmental organisations. Their role is to represent people and groups on the left—to speak for them, portray their situation to others, and continually reassert their cause. None of these organisations have a monopoly claim on the ‘left’ label, and the left must work hard to ensure that the relationship between them does not asymmetrically favour some (especially parties and unions) over the others.

Parties in particular have to confront long-term seismic changes in their societal role. ‘Catch-all’ parties with ‘big tent’ approaches to capturing broad swathes of the electorate are being steadily crowded out by ‘single-issue’ parties who try to achieve ‘preference-satisfaction’ for ever narrower demographic groups. ‘Swing voting’ and party-independence is increasing, and party membership is in terminal decline (with a few rare exceptions). With ever more parties available on the left (liberal, green, workers’, regional-nationalist, etc.), there is a risk that factionalism and infighting distracts the left’s attention from the ‘real enemy’ on the right. Left parties must respond to these changes by relaxing requirements for exclusive party loyalty, and allow their members and voters to support all the parties that form part of any political progressive alliance.

The left needs to accept that it has never had—and will likely never attain—unanimous support among all or part of the population. At best, it can hope to secure pluralities or more-or-less stable coalitions of minorities across select voter demographics. To achieve its aims, the left must seize on opportunities to cooperate whenever willing partners present themselves on the left, in the centre, or on the right. This does not mean it necessarily has to moderate or compromise on its positions, or elide itself with the centre or the right. Rather, it must have a clear idea of which social groups are a ‘yes’, a ‘maybe’, or a ‘no’ as potential cooperation partners on issues that are important to them, based on areas of ideological overlap. The ultimate aim of this is to construct a more-or-less durable ‘left front’ for the purposes of ideological contests—which can be expanded into a ‘popular front’ if elements from the centre and right are willing to cooperate as well.

When pursuing the fight for ‘those without’, especially if it is trying to establish projects of progressive unity and cooperation, the left will always find itself facing four strategic choices. It must resolve how far to preserve or abandon society’s past: certainly, the past shapes the present and the future, so it cannot be ignored, but at the same time it cannot be allowed to overwhelm them. The left must decide when, and whether, to maintain or move on from its major figures: the left movement as a whole is vital to developing and ‘bearing’ left ideology, but none of its personnel are so individually indispensable as to override the needs of good left policy. It must also work out when to shift from articulating critical diagnoses of society to formulating constructive alternatives: protesting against society’s ills is only a starting-point that cannot stand in for creating positive visions of a better state of affairs. Lastly, the left has to determine when the movement, in its separate parts and as a whole, switches from reflective discussion to decisive action: deliberations are key to informing its chosen courses of action, but should never drag on for so long that they prevent these from being pursued.

Overall, modern society is developing in a way that makes left unity ever more necessary but also ever more difficult to achieve. The key to forming projects of left unity is to start small: experimental test cases, with a limited number of people, over a limited time, and for limited purposes. From that point onwards, the left can expand the remit of unity in three directions. It can intensify how much, or how deeply, the various participating sides unite into a single entity. It can extend who the participating sides actually are. And it can modify how quickly unification takes place, in what order of internal steps, and over what period. At every stage, for a unity project to work effectively, all sides must have a clear shared programme to act as a basis for mutual trust, and a common gauge by which to assess the success or failure of their cooperation.

The book concludes as follows:

Currently, the left negotiates with itself with the same degree of suspicion and resentment it reserves for the centre and the right. This manifestly goes against the realities of the ideological spectrum. By far the left’s best hope for turning society in the direction it hopes for is rediscovering what holds it together as a movement. In the end, the left’s decisive consideration—the one that unarguably trumps all others—is its commitment to fighting for ‘those without’ in society. They are the arbiters of its achievements, and their benefit is the summary criterion of its success. It is for their sake that the left must actively find ways to bolster its cohesion, in the face of social forces determined to worsen their situation from its already precarious state. Only through unity can the left meet head-on the threats that currently confront society—meet them adaptably, effectively, and at the pinnacle of its available strength.

It is for progressives of all colours to learn the lesson of left unity before it is too late.

Authors
Marius Ostrowski
Author
Marius S. Ostrowski is Max Weber Fellow at the European University Institute, Florence, and was previously an Examination Fellow in Politics at All Souls College, University of Oxford. His interests lie in the theory and history of ideas and ideologies, especially social democracy and European unification. He is the author of Left Unity: Manifesto for a Progressive Alliance (2020), Ideology (2022), and editor of the Collected Works of the social-democratic thinker Eduard Bernstein (2018–).